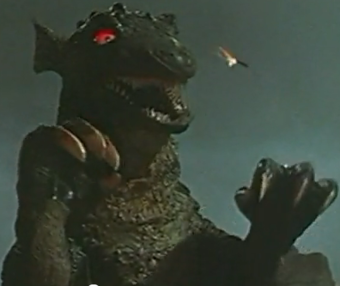 Yeah, I realize that’s going to get me picked up on some really peculiar search engines. Bummer.

My current project is writing a Kaiju novel. Kaiju, I believe, is Japanese for ‘strange monsters’ and is the preferred term for the genre of mostly Japanese giant monster movies. Personally, I describe Kaiju as any fictional/literary giant monster, including American and European contributions like King Kong, Gorga, the Beast From 20,000 Fathoms, the giant Tarantula and so forth. But I think for purists, its only Japanese and maybe Korean.

There’s also a term for movies and television series about guys in spandex leotards grow to giant size to fight giant monsters – Ultraman, Spectreman, Zone Warrior, the Power Rangers etc. – that’s apparently Kyodai Hero. Robots are allowed to be Kyodai Heroes as well, but only if they grow.

Overall, Japanese film or television which makes heavy use of special effects is known as Tokusatsu. So, hey, thanks for stopping by, you learned something useful.

Now where was I?

You don’t really see a lot of those.

Mostly, giant monsters are inherently suited much more to a visual medium. Godzilla for instance has starred in about thirty-six movies over the last seventy years. But the big G hasn’t shown up in a lot of novels.

So actually figuring out how to write one is kind of a challenge.

Bigness is very much about visual impact. A cinematic language to convey ‘bigness’ evolved early on, although it was sometimes messed up, even by cinematographers who should have known better. But there are very well established techniques.

One of the main ones, of course, just to have your actors point off screen and go ‘Holy mother! That’s gigantic.’ You can get good mileage out of decent actors.

There’s also the fact that movie screens are big. It’s really easy to convey a hundred foot tall ape on a forty foot screen, or even a twenty foot screen. It’s a little more challenging on television, on the small screen, obviously.

Then there was messing with your sense of scale by juxtaposing your ‘giant monster’ against miniatures which stood in for well recognised large objects. We all have a good ‘normal’ sense of how large a car or a house is, so if you build a miniature and have your monster looming over it, that conveys an illusion.

So long as you do a good job. It loses a bit of effect if the objects for scale have no meaningful scale. A lot of the later Showa Godzilla movies were set out in the countryside, where sometimes, Godzilla kicking over trees comes across as a regular sized guy kicking over shrubs. Boulders, gravel and shrub… not really a sense of scale.

You try to mix and match human elements with the gigantic – sometimes by building a giant prop hand to grab the heroes, often by compositing the image of the giant into the same frame as the regular people, so that they’re both on screen at the same time.

Of course, in a literary sense almost none of these visual technical tricks are available.

Instead, you almost have to literally invent the literary side of Kaiju from the ground up. This is kind of an interesting, possibly pointless challenge.

It is very much a matter of writing to the skin – its about reactions and responsiveness, its about awareness and engagement in a visceral way.

One of the things about writing erotica, for instance, is that you’ve got a very narrow pallet. There’s a pretty narrow limit to human anatomy, and what you can do with it. Forget the kama sutra, there are just very few pieces of you that go into very few pieces of other people, and vice versa. It’s a genuine challenge to find new, or at least interesting, or at least diverse ways to describe the act.

You reach for the adjectives pretty damned fast, and you sprinkle them around like fireworks. You reach for any synonym for body parts, and you might end up inventing a few of your own.

I did that for giant monsters.

But no matter what, those wells run pretty dry pretty fast. Runaway adjectives and a succession of alternate names for genitalia can take you from the sexy to the ludicrous damned fast. Ultimately, that approach is empty and kind of robotic.

Really good erotica is about someone’s desire, it’s about their excitement. It’s about nerve endings and sensuality, and the complex emotions that drive it. It’s about the experience of desire and sex. It’s not intellectual at all, it’s intensely reactive. It’s about immersing in the moment.

With good erotica, the characters don’t have a past and they don’t think about the future. They’re committed to and existing in that moment, and what they do is delve into the intensity of the moment. The pursuit of sex, the desire for it, the immanence of it about to happen is where the real energy is, and its what gives the sex act in erotica its power. Its odd, you almost have to write around sex, in good erotica. It’s literally about not hitting the bulls eye, but encircling it.

Same thing with giant monsters. I did the process.

So you’ve got a giant bipedal lizard a hundred and fifty feet tall.

What do you do with that as a writer? You can write it down. But just nakedly stating it really has no more impact than ‘My dishwasher is brown.’ It’s neutral fact with no emotional investment, no sensual investment.

‘Giant lizard’ is going to get pretty tiresome, so you need a few other names to call it. You need a few adjectives to throw at it. ‘Ginormous Dinosaur!’ ‘Big ass crocodile!’ But please stop before you get to ‘Hypertrophic Sesquipedalian.’

What it came down to, for me at least, was about writing about coming to grips with the impossible. It wasn’t a neutral factoid. It was about the experience of confronting something that shattered our sense of the normal, of the conventional.

It’s not just a big lizard. It’s never about the big lizard. Because lizards are ordinary, they’re neutral. A lizard is just a statement of mundane fact. A big lizard by itself says nothing. You can’t talk about the lizard.

You talk about vulnerability. Have you ever been mugged? Ever been in a car wreck. We all have this sense of personal autonomy, this idea of invulnerability, of safety in our lives and bodies. Nothing can hurt us… Except when something genuinely threatens to, or does. And then that sense shatters and we are consumed by the horrifying awareness of our own fragility. Think about that in the context of a hundred and fifty foot lizard, where you realize that you are literally as fragile as a leaf in the wind, that you could be uprooted or shattered simply by the thing passing by.

There’s an immediacy to the giant monster, it has to be a fact that demands your entire attention. There’s no past when you face it, no future, there’s almost no self. There’s just it, and your all consuming awareness of it.

And like erotica, you have to keep going back to it again and again, to find new ways to describe this, new circumstances, new contexts to create that experience.

* Terrified passengers in a car, speeding, while the shadow of something as big a building falls over, and it keeps getting closer;

* A business woman looking out the window of her 15th floor office, and there’s a face looking back, with an eye the size of her desk.

* A cat that finds its world shattering into an explosion of noise and debris, as something passes by, too vast to even grasp the whole of it, just the sense of an immense leg striding past.

* An army confronted with an irresistible force that keeps coming closer, refusing to die.

One surprise is how completely the monster dominated the narrative even when it wasn’t on stage. The characters couldn’t be characters, they were still caught up in reacting to the monster, anticipating it, trying to comprehend it, relating to each other through it, and struggling with its consequences.

I once read somewhere that horror was a reactive genre. When you’re faced with Jason Voorhees, or Dracula, or Godzilla, it’s an essentially reactive experience. You don’t express your identity, it’s not about your personality, or your desires, what you want or what you feel. It’s about coping or not coping with the situation. I think it’s an ultimately accessible medium or genre for that reason, not just because we all in some way feel vulnerable and insecure, but because reacting is the great leveller. Who we are is intensely personal, but how we react to threat is intensely universal. There’s no selfness and no selfishness to it.

It’s been interesting, and challenging. I don’t know that I’d want to do it constantly. It feels like something you’d eventually hit the limits of, both as a writer and as a reader. But it has been worthwhile.