David (D.K.) Perlmutter is another local genre writer. I first ran across him through his vividly written ‘American Toons,’ a nonfiction history of animation in America that was fresh, lively and engaging. It is perhaps not a surprise that his debut novel, Orthicon, draws on those sources, following in the footsteps of Roger Rabbit…

Imagine you live a relatively normal life, in a relatively normal place. Then, without warning, you are abducted, and sent to live in a distant place, far off Earth. It gets stranger still when you find out you are not human, or animal, or whatever you thought you were, but completely alien. And your entire life, past, present and future, has been shaped by forces beyond your control, with no way for you to control them.  Save one…

Named one of the top 50 Best Indie Books of the Year by Read.Freely.com, “Orthicon” is a revealing narrative told in many voices, coming to only one conclusion. A revealing debut novel with an intriguing premise: who decides what is real, what is human, and what is otherwise.

I’m a freelance writer based in Winnipeg, Manitoba, Canada. The first major book I had published was America ‘Toons In: A History Of Television Animation (McFarland Press) in 2013; the title is self-explanatory, I think. I’m currently working on an updated second edition of that.  I’ve also written a reference work, The Encyclopedia Of American Animated Television Shows (Rowman and Littlefield).

In addition written, I have two novellas, Honey and Salt and Let’s Be Buddies; and two short story collections, Nothing About Us Without Us and The Singular Adventures of Jefferson Ball. The fiction books are available at the same places as Orthicon. I’ve been writing professionally, since 2009, when I published my first short story. .Although I was writing long before then, from early childhood.

Orthicon is a what if story about fantasy being reality. Specifically, the idea of animated cartoon characters being real beings, and suffering from the same sort of real-world prejudice other beings have faced (e.g. Jim Crow laws, Japanese internment in World War II, attacks on Muslim ‘terrorists’, etc.).

I have always been an animation fan, and have wondered about the pleasures and risks of animated characters being real for a long time. Learning about the restrictions placed on people from “minority” races in reality in the past as a high school and university student sharpened my resolve to discuss this in a fictional text. As well, trying to understand how and why these people would possibly be prejudiced against each other helped to sharpen the satire I saw in such an idea. It was fun Constructing roman-a-clef versions of animated cartoon characters I liked, and hoping readers who were in-the-know enough would get the joke.

It took a rather long time. It was difficult figuring out whose perspectives I wanted to use, what format, etc. Eventually, I figured it would be easier to structure it as an oral history rather than a conventional story narrative to include perspectives from different characters. No two people experiences the events the same way, so I wanted to present the story from as many different “takes” as possible. Pluses and minuses exist to that approach.

The most frustrating part of Orthicon was waiting for it to be published. It ended up being too short for a lot of publishers in terms of word length. I did make a deal to publish it, but the publisher sat on it and wouldn’t do anything about it, so I eventually had to negotiate to get the rights back. It’s come out now because I self-published it; it’s available like that now through Amazon, Kobo, Draft2Digital, Smashwords and IngramSpark.

In fiction, I want to continue to write about the characters I have developed in my shorter stories and hopefully develop longer novel-like narratives for them.

On a non-fiction level, I’m hoping to continue writing reference works and develop biographies of some figures in history whom I think deserve them. I’m interested in history, film, television, music, reference works and all kinds of music, preferably two or more in combination. And animation, as you can judge from two of my books.

I always try to keep my eyes open for new ways and new vehicles to expand my mind and my writing, and try to find new audiences for what I am doing.

My short stories can be read at Curious Fictions/David Perlmutter, and at Medium.com, and my essays at Vocal.com.

Order your copy of Orthicon via Amazon, Kobo, Barnes and Noble, Smashwords and Draft2Digital. 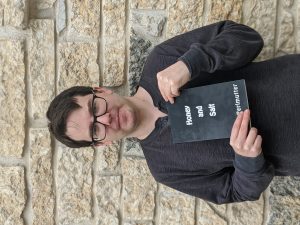