It can be found on Amazon, Smashwords and Draft 2 Digital, Kobo and many other platforms.  It may take a little time to go through, but definitely look for it.

I hope that it lives up to expectations.

Remember, this is a small private project, so if you like it, let me know. Post reviews. Recommend it to fellow LEXXians, Cult Sci Fi enthusiasts, and just about anyone else you can think of. 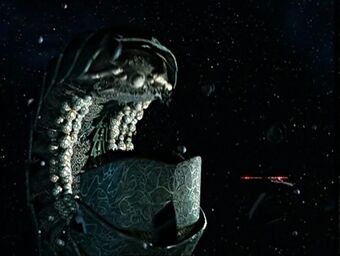 OPENING SCENE – DEEP SPACE – The LEXX is cruising through empty space. It turns, the Gigashadow looms in front of it. The LEXX cruises slowly past as the Gigashadow turns slowly, motionless. It’s not the Gigashadow, just another of the species, and its dead, scorch marks and gouges in its side. As the frame opens, there are other carcasses of dead insects, some dismembered, all of them visibly damaged. The LEXX passes among the dead leviathans, as it flies, small insectoid forms – things resembling stingers and moths, spiders, crabs, centipedes and beetles are visible, forms strange and exotic and all clearly dead. One of the drifting objects is a craft that is half viking longboat and half scorpion.

CUT TO – LEXX Bridge – Stan, Kai and Xev are looking up at the viewscreen, as the LEXX cruises through the insect graveyard. Stan is pensive.

STAN
This gives me the creeps. I think we need to get out of here.

The third LEXX script never actually got written. I had a story worked out, just never followed through.

So you’re probably wondering, why don’t I just upload the second script that I actually did, instead of just blathering away over something that never got done? And for that matter, why didn’t I?

I thought it might make for an interesting story in and of itself.

I started with the Insect Wars….

Let me back up a little for those who don’t know LEXX (and if you don’t, I’m not sure why you’re reading this), the backstory of LEXX, particularly the first two seasons, is that many many thousands of years ago, there were two space faring races. Humanity and the Insects. Unfortunately, the Universe was only big enough for one. The great conflict was called the Insect Wars and ended with the near extermination of the Insect race and the ascendancy of humanity, lead by the Brunnen G.

Unfortunately, a single insect survived, and was able to pass its ‘soul’ or ‘essence’ into a human host. This human/insect became the first Divine Shadow, created the Divine Order, and proceeded on a plan, over thousands of years, to wipe out the human race. That was always Paul Donovan’s backstory.

Details changed over time. Originally, the Divine Order’s homeworld, The Cluster was a giant graveyard/war memorial, and the Divine Order started off as grave keepers, which influenced their costumes/uniforms, their traditions and rituals and technology.

Later on, in Gigashadow and Mantrid that got retconned a bit, The Cluster was just the small world/big asteroid where the last Insect hid to wait for its victim, no war memorial, no monument, etc. Instead, just the dormant insect, being fed on human flesh and growing and growing for thousands of years, while His Shadow and the Divine Order conquered much of the Universe, waiting for the apocalyptic moment when it could burst out.

But we never really did find out much about the Insect Wars. There’s a suggestion in the first season that humanity won, in part by adopting the Insects own living technology and turning it against them. I think Donovan was going to write a novel, but eventually set it aside. 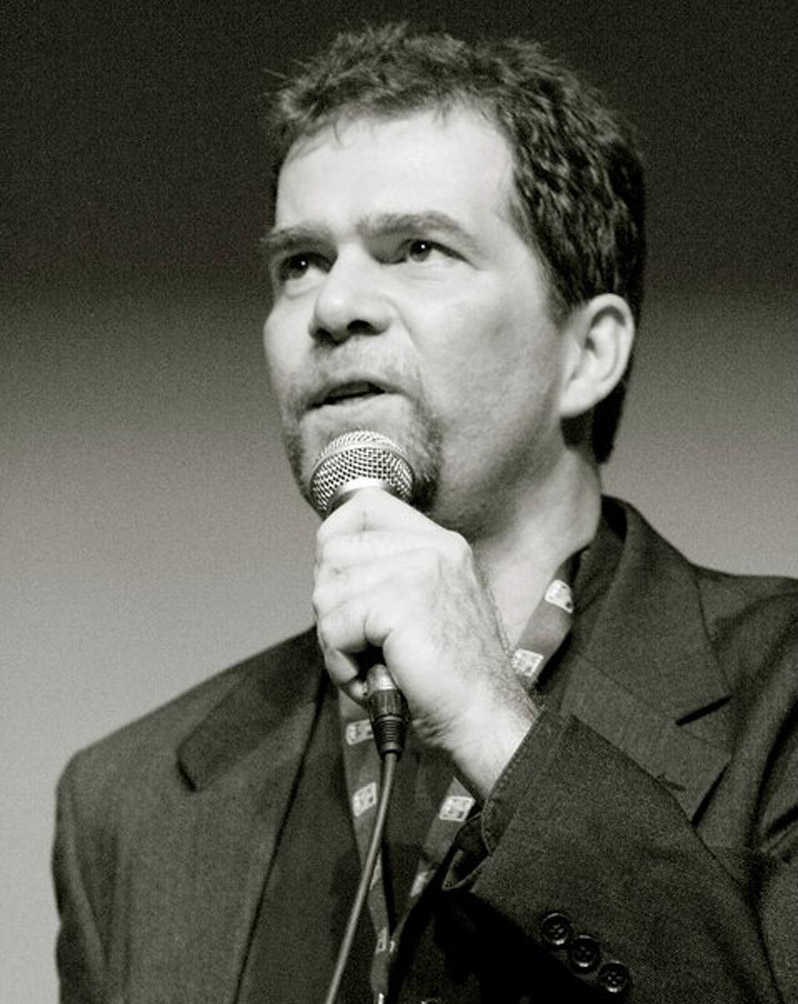 Welcome to another one of my Blog Posts to promote or celebrate the official release of UNAUTHORIZED LEXX, From Here to the End of the Universe, Season Two, on March 31, 2020.  UNAUTHORIZED LEXX, Backstage at the Dark Zone, Season One, is already available as an ebook.

For the third season LEXX volume, there were only thirteen episodes, fifteen if you count the two versions of Rated: LEXX, and the production wasn’t nearly as chaotic or freewheeling as the first two series. So the book was going to be pretty sort. I decided to do biographies and character sketches of the key LEXX people.  This is a version of the Chapter I wrote for Lex Gigeroff.  I offer it up as a tribute to the man, no longer with us.

“On every television show, there’s one person who’s the heart, the emotional center. Every show has one, and it’s Brian, but Lex is right up there with him. He was the guy I really connected with when I was there. He was like a kid in a candy store. He was the one I got to give me a tour. He and Brian set the tone of the set.” Mark Asquith, who did the 2nd and 3rd season LEXX documentaries.

Lex Gigeroff was the sort of friendly hearty guy that’ll fix you with a merry twinkle in his eye, grin broadly, throw his arm around your shoulders as if you were his best friend, and tell you some long complicated but funny story as he reached down and felt around in your pockets looking for loose change.

He was just a fun guy.

And along with Brian Downey, he was the beating heart of the show.

This was the guy that gave his name to the show! And to Giggerotta! And the Gigashadow! Although he had only two solo writing credits, his shared credits with either or both Paul Donovan and Jeff Hirschfield, encompass roughly twenty-seven of the series episodes, and he’s credited as script editor for the entire fourth seasons episodes.

He appeared, in person and in voice through twenty roles in series, played the bound man and Divine Shadow in I Worship His Shadow, he played the musical Klaagyan in Eating Pattern, he played five roles in Lafftrack, appeared in His Shadow’s costume in Brigadoom, Doctor Rainbow in Tunnels, President Hufferton in Fluff Daddy, he has at least four voice roles in fourth series episodes. Often, he was the guy on set, fixing lines, solving problems, actively involved when Paul Donovan was doing producer stuff and Jeff Hirschfield was in Toronto.

LEXX finished it’s run in 2002. But life went on for everyone, and in 2011, Brian Downey, star of LEXX, got back together with Rutger Hauer, who had starred with Brian in the LEXX movie, Eating Pattern for a rematch – this was Hobo With a Shotgun.

The story behind the story is appropriately LEXXish. Jason Eisener and John Davies were a couple of local film makers with a wicket sense of fun, they liked gross and over the top.

Around 2007, Quentin Tarantino and Robert Rodriguez were collaborating on a film project called Grindhouse, a tribute to the old B-Movies, Drive-In features, and gritty downtown moviehouses of the 1970’s. They were going all out, so not only were their movies cheesy and over the top, the films were full of scratches, burn marks and even a missing reel. As part of that grindhouse experience, they decided to run it with a series of cheesy b-movie trailers.

Robert Rodriguez created his own trailer for Machete, starring Danny Trejo, which eventually spun off into a pair of films, Machete and Machete Kills. Eli Roth who had done the Cabin Fever movies did a slasher trailer called Thanksgiving. Edgar Wright, known for Ant-Man and Scott Pilgrim, did a britsploitation called Don’t. Even Rob Zombie came in with Werewolf Women of the SS.

Rodriguez even held a grindhouse trailer contest at his South by Southwest film festival. The winners were Davies and Eisener, with the fake trailer for Hobo With a Shotgun in 2007. It ended up playing with the Tarantino Rodriguez movie in Canada.

Well, apparently, it wasn’t just an award winning trailer. Within a few years, they were making a movie.

Ah LEXX, those classic movies and episodes – Back to the Cluster, the Return of His Shadow, Brunnen H, Dorkakia, My Bonnie, The Salesman, The Clizzards of Woz, the Last Days of the Brunnen G, Prison Planet, Flytrap...

Wait? Never heard of them?

That’s because these are the stories that got lost along the way – that were abandoned, or didn’t get made, or got pushed out of the way by better ideas.

A lot changed on the way to LEXX.

For instance, there were only going to be three movies the first season, and the middle movie was going to be Love Grows. But a very different version of Love Grows, with a live kai and mutating monsters instead of sex changes.

And the last movie was going to be Back to the Cluster, which was completely different from what got made.

Even when Gigashadow was being made, Robert Sigl, the Director turned in a completely different cut and vision of his movie.

LEXX’s creators had big plans for the second season. They were working on it and writing episodes before season one had even finished production. In June 2016, literally 18 months in advance, they released a bible for twenty episodes. Of those twenty, maybe six were made. The rest were lost or radically mutated. 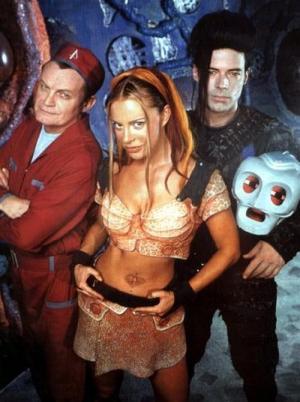 Three weeks to go!  That’s three weeks to the release of LEXX Unauthorized, Volume 2, From Here to the End of the Universe!

This is an ultimate LEXX Book, focusing on the second season of the surrealistic, sexy, strange space opera, LEXX, about a cowardly captain, an undead assassin, a virgin love slave, an annoying robot head, all of them looking for a good time, while carting about the Universe in a giant bug ten miles long that blows up planets. Twenty years in the making, packed with amazing revelations, interviews and all that good stuff!

LEXX Unauthorized, Volume One, Backstage at the Dark Zone, chronicling the first series is already out!  Volume Two will be out March 31, 2020. Don’t miss it! Spread the word!

Seriously, spread the word. I’m writing books about a series that’s been gone for almost twenty years. They’re good books, they’re amazing books, but, I could use some help. A little word of mouth, dropping notes to fellow Lexx fans, or even anyone into cult sci fi. I’d appreciate it. Really. Do me a solid, help a guy out.

XEVENINETY – a bit Gothic romance, a bit ghost story, a bit Texas Chainsaw Massacre, and all LEXX all the time….