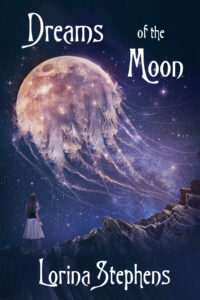 I met Lorina Stephens a few years ago, back when she was the driving force behind Five River’s Publishing, one of the most dynamic of the Canadian small presses.  On top of that, she’s a freelance journalist for national and regional print media, been a festival organizer, publicist, lecturer on many historical topics from textiles to domestic technologies, teaches, and and artist. I’ve always been impressed by her razor sharp mind, her sharp wit, keen judgment and the fundamental human decency which has shaped her outlook.  So of course, I was thrilled to discover that she’s a talented and delightful writer of books and stories as well.  Her novels include Shadow Song (2008), From Mountains of Ice (2009), Caliban (2018) and The Rose Guardian (2019). I am honoured and thrilled to be able to have her as a guest on my blog to celebrate her second collection of short stories, Dreams of the Moon.

The last collection of short stories I published was in 2008. It’s an eclectic mix which I entitled And the Angels Sang, named for the lead story. To my delight, it’s met with quite a bit of positive reaction from both readers and reviewers.

In the ensuing years, I’ve crafted a number of other short stories in between operating a publishing house and all the demands of being an administrator in our other business, one which pays the bills. A lot has happened during that time: our son married his life-buddy, three major surgeries, a failed attempt at elder care, renovating this old stone house which was built c1847, and as I write this, into the second year of a global pandemic.

And somewhere in all that still writing, still exploring ideas and what-ifs. I do have to admit a reluctance to writing short fiction. The literary form seems so restrictive to me, perhaps more having to do with the fact I have too much to say and want to make an epic out of everything. But short story writing is good discipline.

Having said that, I’m giving you 10 short works of fiction in this collection, spanning the boundaries of science fiction, speculative fiction, fantasy, magic realism and absurd fantastica. Apparently, I don’t much like writing in just one genre, either. Creative fences drive me batshit crazy, although I do very much appreciate fences around this sanctuary we are privileged to call home. But there is a theme to this collection, a common thread I think you will find through all the stories. What it is, I will leave up to you to decipher, and thus we will have a silent communication.

I’ve arranged the stories in some loose graduation of dark to light, and again have chosen to use the lead story as the title for the collection. But the title Dreams of the Moon is more, because as a child, and then an adolescent, I firmly believed if I arranged myself just so in the bed, so that when the moon shone in my window, something wonderful would happen. It never did. But I still felt compelled to answer the call of that pale, eerie light.

And then there were all the moonlight walks in the deep of the night which took place well into adulthood. Wonderful moments. Moments I remember with clarity and wonder, whether moonlight so bright on a winter’s night that the trees by the river cast indigo shadows across the snow, or a brace of geese rising up and across that silver face. And as with all things, there is the dark side of the moon: a sleepless night fraught with sorrow and a desperate attempt to rescue someone I dearly loved.

All of these moments influence and underscore what I write. It’s there in these 10 stories. Darkness and light. Wonder and sorrow. The ambiguity, sometimes, of reflected light. Dreams of the Moon.

The second story in the collection, At Union, examines something I have found fearful all my life: trains. Some of my worst nightmares have been about trains. I’m sure those who examine the meaning of dreams would find some sort of Freudian revelation in that. But mostly it has to do with huge, powerful, almost unstoppable juggernauts hurtling through the landscape. Scary stuff. At least for me.

It also has to do with the loss of a child. How do you deal with that? What lengths would you go to in order to bring them, or in fact anyone you loved, back from the dead? What pact might you make?

Not a new concept by any means. What story is, really? It’s all in the way we examine those concepts which may provide a new perspective on a familiar story. So, for me, I wanted to mess with the idea of what we most fear is often right there in our everyday, ordinary lives. There is the extraordinary in the ordinary. Present a familiar scene to the reader. Make them comfortable with that familiarity, and then rip reality out from under them. It’s what makes the very best kind of horror: the concept of the familiar, and of sacred trusts, suddenly realms of danger. There is no sanctuary when the ordinary becomes nightmare. Just look at what the master of horror, Stephen King, has written most of his life.

And in all that the concept of irony, of walking unwittingly into what we’ve been fighting or avoiding all along. That we become what we most fear.

So it is I set the story quite literally in Toronto’s major train nexus, Union Station. It’s the terminal where trains local, national and international (from the U.S.) meet. It’s a river of humanity, and in that river all manner of stories aggregate and flow and overflow into the world. The title is also a metaphor.

In this case a father finds himself in a little-used level of Union, meeting the train of the dead, where for a short time every day he gets to visit with his dead daughter. She’s existing in a twilight world, a flat and colourless world which he longs to change for them both. But you should be careful about the rules you break, the deals you make, especially when dealing with the forces of the natural world.

But you’ll have to read the story in order to discover how that story unfolds and resolves.

Dreams of the Moon is available in trade paperback and ebook, either directly through my website or through your favourite online bookseller wherever you live in the world. It’s also available through elibrary services globally.