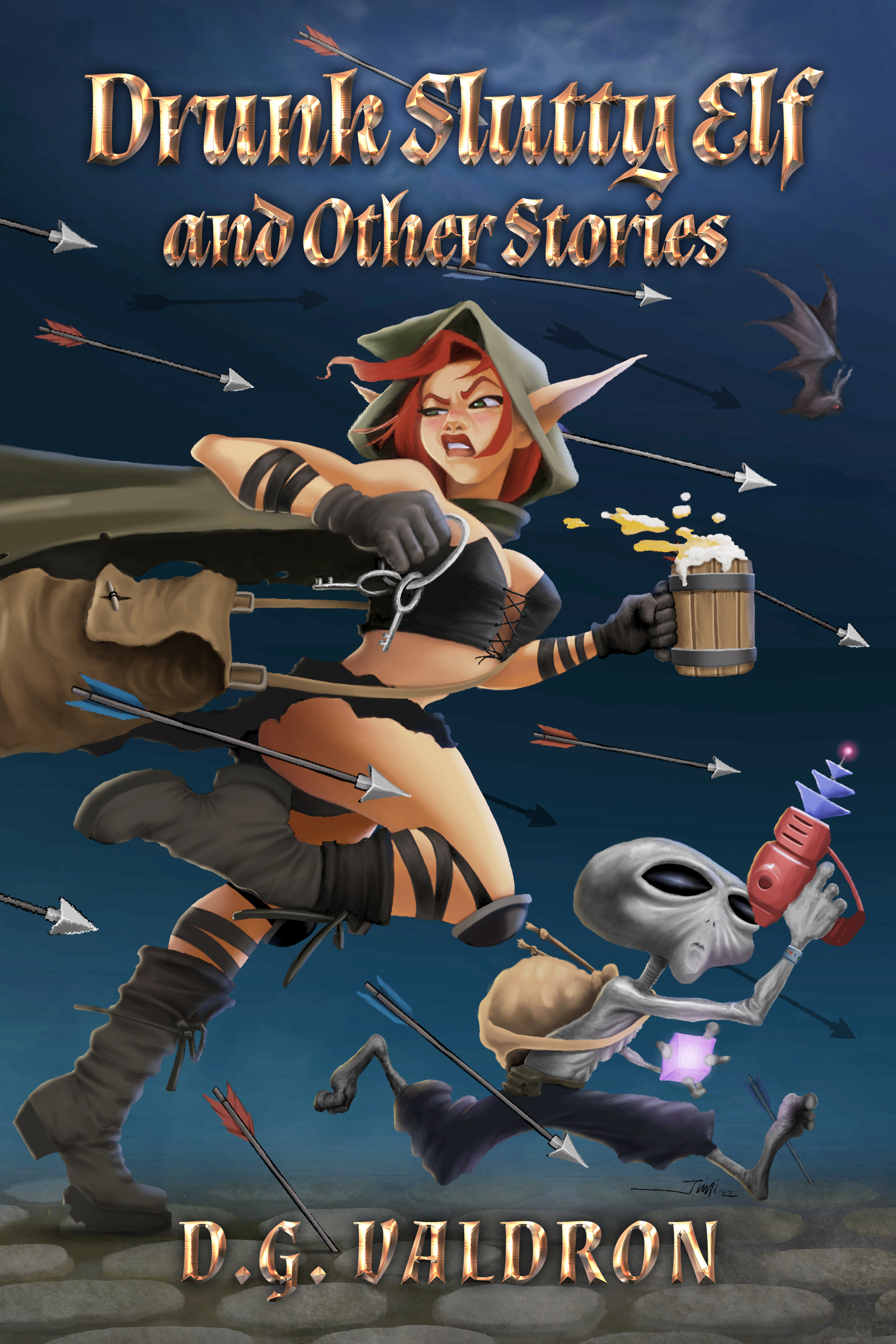 Hey!  My latest collection of short stories.  Released October 14, 2022.  This actually very belated. I should have posted this months ago, and posted it on Facebook months ago.  I am so bad at this self promotion thing it’s unreal.  I think I’m way too self effacing. I retained Paul Carpentier to copy edit for me, and he couldn’t stop talking about how funny it was, both at World Fantasy and afterwards – I almost wanted to run away and hide. There’s something in me that just doesn’t know what to do with praise, that won’t believe it, that suspects or expects an attack or something. I really have to overcome that.

Background: Way back in the old, old days, I wrote a lot of horror, and a lot of comedy. Two sides of the same thing, really. Some of it published, some of it didn’t. I think my funny stories actually sold better – I remember Simulaw in Parsec, the Monkey Sea in Northern Fusion, Romance of the Undead in the Tinder Box, and the Bardic Runes bought three or four stories.

Anyway, way back when, longer than I care to remember, I decided to compile the horror stories into a six chapbook series, themed for each iconic monster in horror.  And around that time, I threw together a couple of chapbooks of humour. I sent the humour ones to my grandmother, I figured she wouldn’t be one for horror. She was alive then. Damn, so were Mom and Dad, Aunts and Uncles, Cousins. So many people were alive, it’s kind of a shock to think about.

Anyway, fast forward to the modern era, where self publishing opportunities are quite dramatically different. It’s night and day. I had all these stories rattling around in my hard drive, a lot of them had been previously published and were burnt.  So I threw out a trilogy of horror collections. They didn’t really do that much – the LEXX books and Doctor Who books sold better, if you can believe it.

Honestly, I don’t think there’s much of a market for horror these days.  Go to the bookstore, there’s usually a small section for horror, usually close by Fantasy & Science Fiction.  I think basically it’s Steven King singlehandedly keeping horror alive as a genre and making space for other writers and for the marketing department.

And for that matter, there’s not much of a market for short stories, maybe a lot less of a market. Look for short story collections and anthologies on the shelves, even in genre section? They’re maybe less than 1% of titles? It’s all novels and series of novels, trilogies, whatnot. The few short story collections are extremely niche – Often its connected to a famous writer like Joe Abercrombie, Steve Erikson or Walter Jon Williams, who have a following, a bunch of stories, and whose name will sell. Or its connected to a franchise, like Star Trek or Doctor Who or Warhammer. I’m not really seeing a lot of collections and anthologies overall, even in F&SF.  There are magazines and anthologies, but mostly, I get the feeling that they’re marginal. Small press or medium press efforts, personal crusades, things like that. I don’t think they’re mainstream for the most part. I think they’re fringe.

So short story collections of horror? That’s pretty much a DOA combination. I didn’t worry too much about marketing. Basically, I didn’t think it would be all that responsive. I have this idea that not everything is equally responsive to marketing efforts.  Some stuff you can push, and you can make things happen. Other stuff, its like pushing on a rope, effort won’t translate to results.  Is that correct? Maybe I’m defeatist. Maybe it’s a self fulfilling prophecy.

No big deal. It would be nice to sell a lot of copies. But mainly, in that phase of self publishing, I just wanted things out of the hard drive and into the world.

But somewhere along the way, there was a surprise. Axis of Andes back in 2021 turned out to have legs.  It wasn’t a giant seller, moving thousands of copies. But it attracted attention, it got reviews, it sold several hundred copies, hundreds in a month, and even past it’s peak, it continued to sell. That was a bit of a shock, I didn’t actually expect anything. But… it had legs. Go figure.  I made no effort to sell it or promote it, I had no idea what to do to market it, and I was busy with other things.  But… it had legs.

Which got me to thinking maybe I should look at pushing some of this stuff.  And maybe think about pushing other stuff, designing stuff for a push.  The humour collections were always on the table. They were dues to come up no matter what. But out of Axis, I started to think maybe there was some actual potential beyond releasing my critters into the wild.

Short stories are tough, as I said. But genre, Sci Fi and Fantasy  does sell. There’s a marketplace there.  So maybe short stories in Fantasy could sell, with the right sin. Horror is pretty dead. But people like to laugh. Good comedy that might sell.  This might be workable.

I think maybe what helped Axis sell was I got lucky with a cover and title.  So I started looking at that seriously, trying for titles.  Aliens and Elves was a starter.  I eventually settled on Drunk Slutty Elf as more ‘kick ass,’ more ‘in your face’  More of an attention grabber. And that’s the whole point, grab attention, intrigue, get someone to stop and look.  And a cover, a really good cover – early on, I wanted something eye catching, the incongruity of a gray space alien in a fantasy setting, along with a hot chick. I suppose ‘hot chick’ isn’t PC, but let’s face it look at most magazines and book covers, sexualized or not, the female face and female form catches attention. If aliens came down and tried to define humanity’s self image, that self image will be young and female, it’s our defining iconography. So hate me for being shallow, but it is what it is.  It took me well over a year to get it the way I wanted.  I originally wanted to follow Axis by only a few months, but it took time. Eventually, Jimi Bautista really did an amazing cover.  Bottom line- kick ass cover, kick ass title, genre and humour.

This might actually sell.  Or more critically, this might actually be something that responds to sales efforts.  Maybe, maybe not. But I think it has a chance, and I want to try.  I’m way behind schedule, obviously. I wanted October 2021, it didn’t actually come out until a year later, and real efforts won’t be until 2023.  But between the Axis books and the Drunk Elf books, its worth the shot.  We’ll see how it goes.

So far, sales have been modest. Better than the horror collections, but it’s not taken off like Axis did. The people that have read it all liked it a lot. I was able to take it to World Fantasy Convention and use it as my showpiece, and even give away a few copies, including to Walter Jon Williams, whose work I adore. So it’s been worthwhile. I think if I push, it will move.

And if it doesn’t?

Well, it’s a damned good collection.  They’re damned good stories.  A lot of them found homes before, some of them got honourable mentions in Year’s Bests.  Good cover, good art, good title.  Win or lose, I’m proud of it, and it and it’s successor are out there in the world.  That counts.