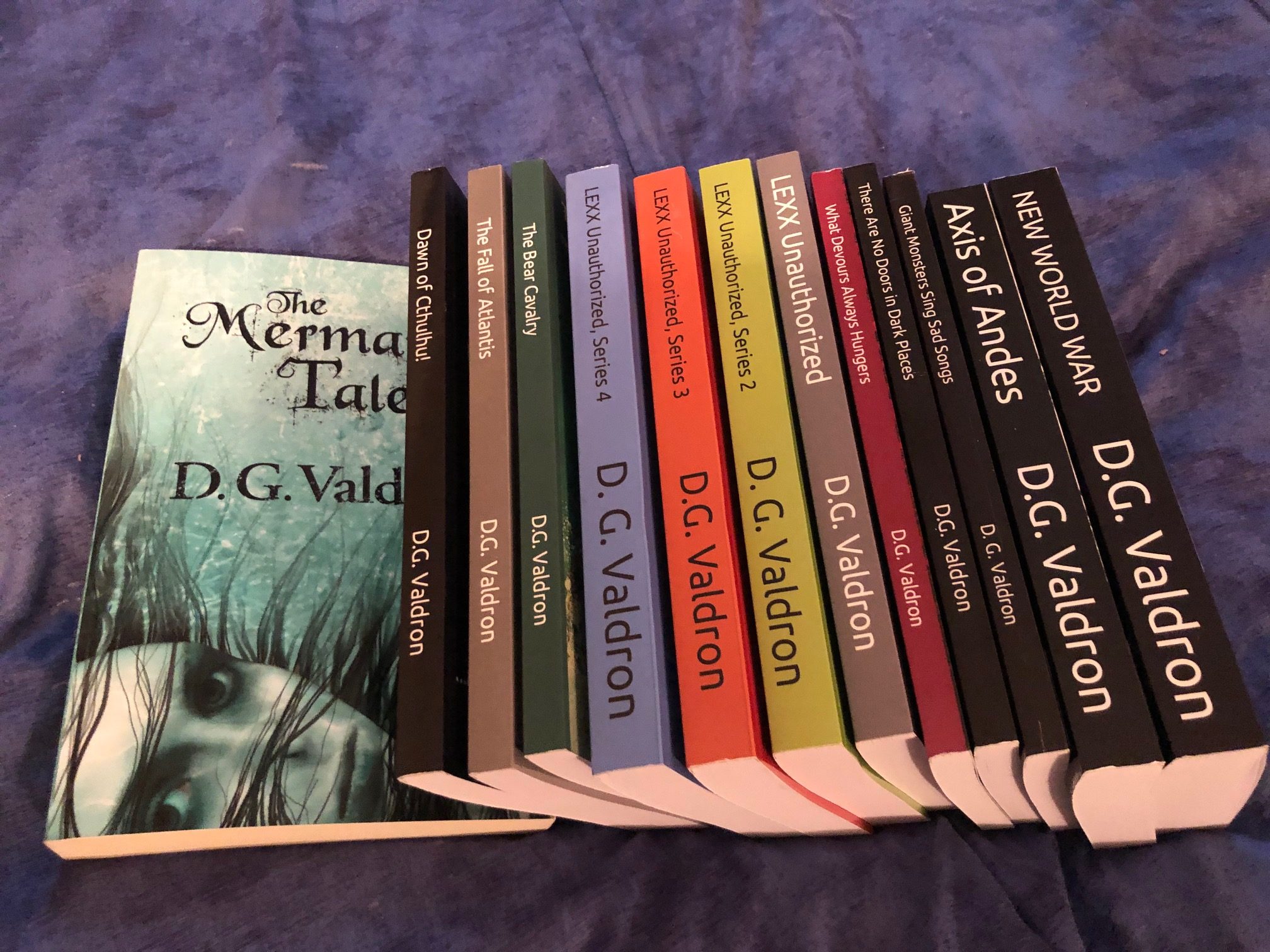 Well, I don’t really listen to audiobooks. Maybe I should. I listened to my friend Julie’s 12 episode Calamity Jane western audio podcast and that was pretty good. So maybe I should give it a shot.

Because Audiobooks are exploding all over the place these days. I’d heard about it the last couple of years, but I hadn’t quite realized how much.

So is this meaningful? Well, I looked up the statistics. And there’s a tangled knot of information. But here’s how I break it down. The US book industry (I’m assuming that includes Canada) is worth about 30 billion dollars in 2019-2020, the last year before Covid. Now of that, the big five book publishers, Penguin-Random House, Hachette, Harper-Collins, McMillan and Simon-Schuster, the guys you find dominating bookstores, represent about 10 billion dollars in sales during this period. There’s maybe another seven billion represented by the big five Educational publishers, the guys who do school textbooks and stuff. The rest, I assume divides up among the small and medium publishers, specialty houses, etc., the small fry.

Approximately 18 to 22% of all book sales are ebooks. They had a period of explosive growth – between 2010 and 2019, the ebook market grew fivefold. That is, between one out of every five or six books sold is an ebook. They represent about 10% of the total value of the market, or less.. This represents maybe 11% of the total value of book sales – the lower figure is perhaps because ebooks are sold dramatically more cheaply than paperbacks, because of lower infrastructure costs. It’s messy, I’ve seen statistics that suggest that the total value of ebooks is less than a billion dollars a year. Amazon represents about 70% of ebook sales. Ebooks were growing explosively for a while and were the big thing, but now they’ve plateaud and even declined a bit. The ebook market seems to have stabilized.

From what I can tell, it doesn’t look like the ebook growth came at the expense of the paper book market. Paper book sales mostly held steady, about 70% of all books sold are paper books. A lot of ebook readers seem to be new readers or additional purchasers. There’s a bit of guess work here, because looking around, the statistics and numbers are all over the map, I suppose because different metrics, territories and time periods are used. So I’m just trying to get a grip on things. There’s a lot of guessing as to what various numbers mean and how they plug into each other. And I’m rounding off and ballparking seriously.

By the way, this is not me being an expert. This is me just trying to get my head around the subject and find my feet. If anyone wants to come in and actually suss the numbers and plug and park them into each other more accurately, be my guess. I’ll be the first one to buy popcorn and cheer from the bleachers – just don’t be an asshole about it.

All of this background brings us to audiobooks. Audiobooks have been growing explosively the last seven to ten years years, attracting all kinds of attention. Basically, from year to year, they’ve shown an average growth of about 25% per year, and they’re expected to carry on that growth, 25% per year, through to 2030 or 2035.

The earliest years I can find a number suggests 0.75 billion in 2017, 0.95 billion in 2018, 1.2 in 2019, when they first surpassed ebook sales, 1.3 billion in 2020, 1.8 billion in 2021, and onward.
Assuming sustained 25% growth on average, year to year, then by 2030, the audiobook market will be 35 billion, or larger than the entire current book industry in the US. Which is mind blowing.
Yeah, I’ll take that with a grain of salt. Between the ages of 6 and 12, I doubled in size. Which means that by my current age, I should be about the size of a medium baleen whale. Well, I’m not. Indefinite open ended projections need a bit of skepticism. But there’s no sign that we’re hitting the limits to growth yet on audiobooks. Likely we won’t know we’ve hit the limits, or at least hit an equilibrium, until sales peak and scale back a bit For at least the next few years, it’s going to continue to grow dramatically.

As ebooks have stabilized, audiobooks have been taking off. There’s some evidence that some of the decline of ebooks is because of audiobooks. That audiobooks are biting into the ebook market.

That kind of makes sense, because both ebooks and audiobooks are portable, downloadable, electronic formats. So it stands to reason that they’d be competing formats for the same audience. So one thing we’ll probably see going forward is some degree of tug of war and eventual stabilization as each kind of finds its optimum niche and preferential readers.

I’m less clear about the impact of ebooks and audiobooks on physical tangible books – I suspect that they’re losing at least some potential market share – but physicality has its own quality, and physical books seem to be at least somewhat holding their own. I suspect ebooks and audiobooks are generating or recruiting new readers as much as they’re taking away from physical books. I’m just guessing here, as I try and sift through the morass of numbers.

But my sense is that part of the excitement that attached to ebooks and audiobooks growth is that we’re looking at new readers and new money, at least in part, rather than merely reshuffling of
the existing pie.

Right now, I think the audiobook market is at least twice the size of the book market, and it’s making gains on the regular books. 25% increase per year, that’s crazy. That’s gold rush, wild west country. That’s “It’s raining money, everyone run around with a bushel!” territory.

So I’m definitely getting the runaway enthusiasm and interest, the sense of excitement and the promise of opportunity here. Everyone wants to get in on the ground floor and ride it to the top.
But here are some thoughts. I’m not sure that people really fully understand this market that’s blowing up around us. We get the sound and fury, but how much do we understand what’s going on, and more particularly, how much do we understand the nuance to take maximum advantage of it. I suspect it’s a bit more complicated than running around holding a bushel to the sky as money rains down.

I’m not sure how good a grasp we have of why this market is exploding, and who is listening to these books and why and how. There’s a lot of statistics, so people are trying to figure that out, definitely. But at the same time, I think the audience itself is evolving and figuring itself out, and maybe figuring out its tastes and preferences.

I think that there’s some gatekeeper issues. Ebooks were genuinely democratic – anyone could do one, even a guy like me. On the other hand, it takes quite a lot of sophistication and technical skill to do an audiobook, and to get it out into the market and positioned. In that respect, I think it behaves more like a print book.

For that reason, there might be a tendency to treat it like and market it like a print book. But I’m not sure that’s the way to go – this is a digital audience.

I find myself wondering how convertible a written book is to audio. It seems to me that they’re very closely related – like a theatre and a movie script. But theatre and movies offer different opportunities and limitations. Is this the same with print and audio? Is the language of audio subtly different? Are some print books friendlier to audio? And for other books, should we develop a style or system of editing to more fully and effectively adapt?

Regarding adaption it seems to me that both explosive growth and subsequent contraction may drive stylistic experiments and innovation, to try and perfect the form, capture the market. What works for audiobooks – flat normal transparent voices, voice styling, soundscapes. Will tastes evolve? I think that the thing with being on ground floor, and despite years of explosive growth, we’re still there, is that you learn.

Artificial intelligence audiobooks, text to speech systems, have been making huge strides and a lot of people are working on them. That has the potential to be game changing, including an explosion of piracy.

Anyway, just a few thought. I think in subsequent posts, I want to explore some of these ideas in more detail.