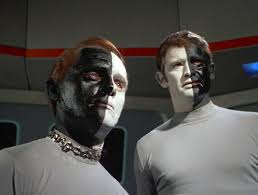 I’m trying to explain just how political Star Trek, the original series was, how blunt its messages were, how they basically picked their issues off the day’s newspapers, and how they were ridiculously ‘woke’ in their day in ways we’d find ludicrous today.

He’s not getting it.

The thing that gets me about all these angry angry guys railing away against ‘woke’ this and ‘woke’ that and the awful ‘sjw’ menace is how astonishingly little that they actually have to say. They don’t have any arguments. What they have is a speech. Not speeches, just the one speech, trotted out, for every occasion. One single speech. And it’s not even a speech, it’s just a rant. One single, invariable, all purpose monotonous rant.

You can’t talk to them. You can’t reason with them. You just trigger them, and you get the rant.

So he goes from ranting about Doctor Who, and it’s on to the laundry list – the all female ghostbusters, the all female ocean’s eleven, the feminazi terminator movie, Star Wars, Batwoman, on and frigging on, a long list of grievances amounting to an incoherent rambling scream of rage. “Get woke, go broke!”

Look, I’m going to lay it out. It’s not about Wokeness, or Political Correctness, or SJW’s that’s ruining your movie franchises.

Women didn’t ruin Ghostbusters. The movie failed, and it failed because it was a mediocre sloppy production, that’s it. That’s not on the actresses, or ‘wokeness.’ That’s on a Director who followed through on an outline he wrote on a napkin, without ever bothering to refine it. That’s on a weak director who decided that plot and dialogue wasn’t all that important since he could just turn on the camera and record improv. It would have been helped by actual script development, by actual editing, vetting, rather than just let people flounder.

Terminator Whatever. It’s not feminism that ruined it. It’s the fact that we’re seven entries into a franchise that has only one single idea – evil skeleton robot comes back from the future to kick ass. It’s not a bad movie at all, it’s just been done to death.

Batwoman? That’s just a bad show. It’s terrible. The fight choreography is ludicrous. The actors are blocks of wood less expressive than leggo. The dialogue is atrocious. The scripts are terrible. Everything about it is cheap, incoherent and half baked. But so what, there have always been bad shows.

The issue with Star Wars is not that people are trying to be woke, or that social justice warriors have taken over, or that feminism and political correctness hold sway. The real problem with Star Wars is that it was one really good, groundbreaking, paradigm-changing trilogy forty years ago, and it’s been coasting ever since. Coasting. Coasting for forty years.

The problem is that Star Wars, Ghostbusters, Terminator, Charlie’s Angels, Ocean’s Eleven, Star Trek, James Bond… these are all franchises that are forty or fifty years old, they’re all long in the tooth, they got whiskers, there’s iterations, and reboots, remakes, sequels. A lot of this stuff is just worn out, it’s not political correctness, it’s just corporate greed trying to squeeze a few more dollars from the product, trying to figure out a way to pump a few more lungfuls of air into tired old hacks, trying to figure out how to do something new while being terrified of doing anything different. But the corporations have invested so much into these things, they can’t let them go.

There are plenty of bad movies, and plenty of reasons why movies are bad. There’s endless ways that a film or franchise can go wrong. It’s not about the one thing!

And there are plenty of good movies, and plenty of movies and television series that have good things in them. But this doesn’t matter to the Ragers against the Woke. Because all they care about is their idiotic litmus test.

In the end, they’re unable to distinguish good from bad, they can’t evaluate the bad or identify problems, they can’t acknowledge the good. All they can do is scream about their hobby horse.

But no, we can’t discuss any of that.

We can’t discuss just how overtly political and politicised, all the old stuff they venerate is.

We can’t discuss anything.

Instead, we just have to endure the ‘Anti-PC’ Rant. Doesn’t matter that it’s the same, one size fits all, tedious rant that they seem to have for every occasion.

The problem with these screamers is that they insist on sucking up every last molecule of oxygen in the room. And I’m sick of it.

I want my oxygen back.

And if they say something obviously, blatantly, profoundly stupid, I’m going to laugh.

1 thought on “The Rage Against the Woke”