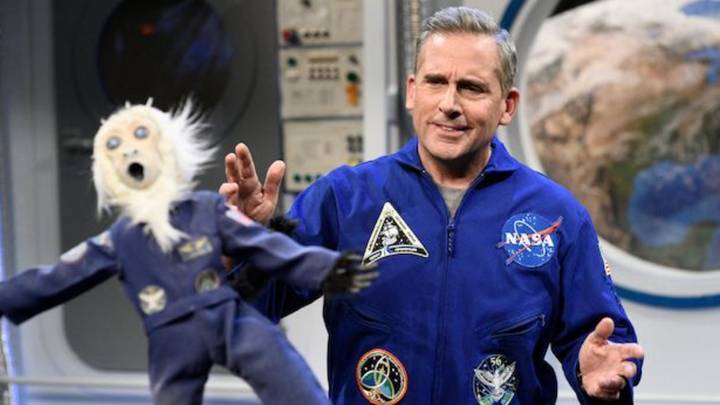 So, I just suffered through the Netflix series, Space Force. It’s an extremely awkward non-comedy starring Steve Carrell and John Malkovitch. John Malkovitch plays himself, in the role of a civilian scientist named Mallory. His job is to be really smart, principled and slightly sarcastic. Steve Carrell plays a socially awkward, repressed guy in over his head… basically, it’s every other role he’s ever played, this one is called General Naird (Nerd! Get it! Ha ha).

If that doesn’t creep you the hell out, I don’t know what will. But yes, the notion that America has a manifest destiny to militarise a lifeless, airless rock far out in space and be ready to fight a war is presented with utter lack of affect or irony. I suspect that maybe there was some intent at irony, but they didn’t want to offend the ‘America F*** yeah!’ and ‘Hey, youse guys hate America!’ crowd, so they just leached all the subversiveness out and played it straight.

And this is really the problem. It’s a sitcom that’s not played for laughs. Instead, it’s actually painfully straight, with no sign of self awareness at all. We get the beleaguered General Naird (Nerd! Get it! Ha Ha) struggling to launch his space force, with training exercises to substitute life and warfare on the moon, struggling for funding, engaged in bureaucratic battles with other branches.

There’s just not a bit of fun in any of it. There’s no comic timing. Just this weird unctuous sincerity, as if they wanted to make a sitcom, but didn’t actually want to offend anyone. So they play it straight, go the patriotism route, and expect everyone to salute while patriotic music blares.

The weird thing is that they try to be funny. They’re not good at it. But they try. They go out of their way to give characters funny names like General Naird (Nerd! Get it! Ha Ha), General Kick Grabaston (Kick! Grab Ass! Get it! Ha ha), Admiral Rong (Wrong! Get it! Ha Ha), and many more just like it – there’s the Pelosi character ‘Pistosi,’ and so forth.

That’s about the level of humour on display. The sort of name-mangling that Beavis and Butthead parodied. But here, we’re supposed to think it’s funny. It’s all like that. There are ‘situations’ which I assume someone decided had comic potential, but they’re handled perfectly straight, with nary a glint of humour or slyness. This often makes them kind of horrible. And if that isn’t bad enough, there’s an unblinking ‘Patriotic’ sincerity that sucks any kind of life out of every scene.

If you read the reviews, you can tell everyone is bending over backwards to be kind. There’s a lot of talent attached to this, and a lot of money. So generally, what you get are ‘well, all the words in the script were correctly typed.’ ‘Talented cast.’ But no one says it’s funny.
And it’s not even terribly competent. Given the money that they obviously spent on it, so much of it looks so shabby. There’s productions that cost a hundred grand and look like they were a million. This? This sucked down millions, and looks like someone’s low budget mockbuster.

Frankly, I think they missed the boat completely.

Let me give you an alternate premise.  Not my premise, it was suggested to me.

Let’s say that an arrogant, incompetent, narcissistic idiot is in the White House. A child man who throws tantrums, totally unlike the current President. He decides that there’s going to be a ‘Space Force.’

It’s lunacy. There’s no infrastructure, there’s no personnel, you may as well wave a magic wand and command whales to speak french. His staff knows this. But they’re stuck. They have to create a Space Force out of nothing.

So they fake it!

How hard could it be? Set aside a couple of million dollars, go out into the desert, build some sets, some fake interiors, mock up a lot of footage, throw in some CGI… and hey, President Nimrod is happy as a clam! Tell the President it’s all super-double-secret hush hush, can’t be mentioned publicly, show him all the confidential secret video as America builds fortresses and missile bases on the moon, constructs its own death star, manned missions all over the place, “Boots on the moon!” and the whole shtick.

As long as President Dumbkopf never mentions it publicly, and he thinks he’s privy to the world’s greatest secret, he’s happy. And you’ve saved trillions of dollars down the drain on some catastrophic boondoggle.

This actually happened for real, once upon a time. Look up Potemkin. Hell, it’s been a movie, this is just Capricorn One played for laughs.

Now that is a premise with comedy, a bunch of desperate, frantic men, trying to get away with the world’s greatest hoax, for no profit, but merely to keep the President from throwing a tantrum that blows up the world? Imagine being in that situation. Having to come up with a new space-mission every week to keep the President amused. Everyone is under insane pressure, they’re constantly pulling things out of their butt. Just imagine –

* Journalists get on the trail of the Space Command hoax, and they have to divert them.

* The Russians get wind of Space Command, but suspect that it’s for real.

* The President wants to hear about aliens, so they have to make some up for them.

* The President decides its time for a Mars Expedition, and they have to build a new set.

* They actually have to send one of their actors into space onto the International Space Station to keep the ruse going.

* Each week, the hoax grows more ridiculous and implausible, and the President keeps demanding more.

That’s what they should have done, as opposed to the soul less vanity project that they did.

Still, it’s too great an idea to let it go to waste. Maybe I’ll write it myself.