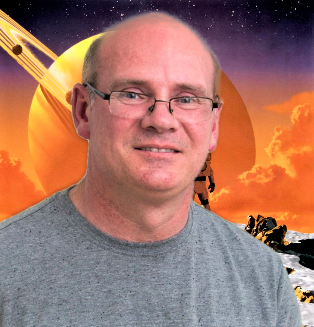 The one and only time, so far, that I met Daniel McMillan was last year in Brandon.  I was giving a workshop on Copyright for the Brandon Public Library and he was one of the participants.  Even in that brief session, Daniel distinguished himself with his focused, relentless approach. He wasn’t just there to learn, he was there to write, and he was voraciously interested in everything about the craft.  Since then, I’ve been impressed by his dedication to his craft, and to his prodigious output.  Now, on the eve of Daniel’s latest novel, the exotic and intriguing  The Lost Temple of Phoketh, I’m happy to showcase him and his work…

I honestly don’t believe that not expressing one’s self creatively is even an option. Nor is it self-indulgent, and it is certainly not a luxury meant to be attempted by the creative elite. We all owe it to ourselves to unearth our passions and chase after them or, rather, allow them to come to us without being shoved away by irrational fears or feelings of ineptitude.

Writing, for me, has become like a disease for which there is no known cure. Not that I would want to be cured. I love my illness, and will never relinquish it to anyone under any circumstances. It has set a long-dormant part of me free.

I wasn’t always a writer, but at the same time, I was always a writer. I published my first book in 2017—a non-fiction book that I may someday dust off and polish, but until then will remain mine and mine alone. It doesn’t live up to my standards. Even though it would take some effort to make it into something that I would share now, the point is that I completed it and loved doing it. At the time, it didn’t matter if it was good or not. The goal was just to get it done.

Clawing my way through that early writing process until the book was finished allowed me to internalize the feeling I would come to have time and again—the satisfaction of a completed project. I had written a book! I could hold something in my hand that had been my idea from its inception to the fully realized finished product, and it was blissful. It also helped me to develop a process that made the next project easier than the first. And of decidedly better quality.

I think we can all do something like that. I believe we owe it to ourselves to keep trying things, and possibly failing at them, until we discover our passions. Before I started writing in earnest, I had drawn pictures and painted, tried my hand at sculpture, built models, and done a lot of other things. But I was always, in the background, dabbling with writing. I suppose I just thought I didn’t have what it takes to be a writer. I mean, who am I to write books, right? But it was always the thing I came back to, pushing it a little farther each time I returned to it than I had the last.

Science Fiction has always been a mainstay with me, to the degree where even science in general became important to me. As much as I enjoy Sci-Fi books, movies, and TV, I also get a similar charge out of learning about the structure and principles that underpin all of existence. I’m fascinated.

When I was a kid, I was always attracted to anything that had spaceships or aliens in it. The Starlost, Buck Rogers, Battlestar Galactica, and even Rocket Robin Hood were early television favorites, as well as comic books and movies. I just absorbed it all, as much as I could, given the limited resources a young Sci-Fi enthusiast had growing up on a farm in Northern Ontario.

The first chapter book I ever read cover to cover was The Vandarian Incident by Martyn Godfrey. It’s a little, 100-page book that I got from the Scholastic Book Club as a kid, and I read that thing over and over until the covers were falling off. I loved it.

But even back then, I realized that someone had made that book. They had conceived of the idea, fleshed it out, and wrote it down just for me, or so it seemed at the time. As I found more things to read that captured my imagination and ignited my spirit, I came to look at their creators with awe and adoration, creating a degree of separation between them and myself them that would take decades to overcome.

I’m glad I eventually got past my internal voice of inadequacy, because I have never been so creatively fulfilled in all my life.

I’ve been a published author for a relatively short while now. And it didn’t happen for me until I was nearly 50 years old. After the publication of my first book, people thought that was nice, and they congratulated me politely, but after putting out five books over the last three years, those same folks have started taking me somewhat more seriously. That’s nice, of course, but what they don’t realize it I don’t write for them. I write for me. Because I have to. It’s developed into a compulsion that will not be pushed aside.

Since I started publishing, many people have come to me stating that they’ve always wanted to write, but never followed through on it for some reason. Some of those individuals have told me of notebooks they keep—full of story ideas and character sketches, snippets of anecdotes and exchanges of dialogue. But never finished stories.

Others have praised me for following through on a dream, and tell me about their own unrealized passions, left behind in exchange for the repetitive comfort of days passed without putting themselves out there or risking the exposure of their innermost selves.

I see these scenarios as tragic and unnecessary, because everybody has something to add to the betterment of everything around them through their innovative contribution. I think creative expression is a fundamental part of what we are meant to do as we move through our days in this reality.

I love the writing process and the worlds I create and the characters who inhabit them. Right from the original idea, whatever that may be, that drives me to flesh out a story into a finished product, I become fully invested in the telling of the tale.

I’m very particular with choosing names for characters, settings, ships, or anything else that my stories require as I world-build. I do a lot of research in this area and use any resources I can find to help me in this. I’ll mash words together or make up random words until I have pages of handwritten notes of names for characters, planets, ships, and all the other things I incorporate into my stories. They have to sound right. Even though I have a long, long, list that I’ve made up, the truth of the matter is that I’ll never use most of them. Ever. And that’s okay. It’s part of the process and I enjoy it.

A major component of my success is the fact that I don’t operate within a vacuum. I have a fantastic editor, Todd Barselow, whom I enjoy working with and deeply respect. He always takes what I give him and improves on it. I have a talented cover designer named Valdas Miskinis on my team who makes my books look great. I also work with amazing audiobook producers, including Jessica Green, who just finished Arc of The Hellion and is eager to do the other Loren Alaysia books. I have an ever-expanding network of fellow authors and creative people who push me to meet my potential, and friends and family who encourage and motivate me.

I get a lot of help. Sometimes I need it more than others, but it’s nice knowing that it’s always there when I do. As I’ve told everyone who’s become a part of my team—I’m patient, but driven, and I will achieve my goals.

It amazes me now that those creations came from me—the guy who once felt like what he had to share didn’t matter. It turns out a number of others (thankfully!) disagree with that assessment.

Push yourself. Try new things—anything that interests you for any reason (unless it would hurt anyone else or potentially land you in jail!) is worth a little time and energy put into research. You never know where your talents lie until you uncover them. Inspiration will come, but only if you meet it halfway.

Whether it’s windsurfing, model-building, drawing or sculpture—cooking, fixing things, sewing or website design. Volunteering or collecting coins. Whatever inspires action in you, even if it’s just watching a gazillion YouTube videos on the subject or reading more about it, must be pursued. Push it as far as you can and see where it leads. If you arrive at an impasse, or it stops being fun for you, let it go. Those new skills will be yours from then on and may become pertinent in some other endeavour.

But don’t quit there. Try something else. Never stop investing the development of your highest self.

But you can’t improve at something you don’t try. And why would you worry about the opinions of people who have been too scared to pursue their own passions?

Remember, it’s not about them. It’s about you.

And if you strive to accomplish the things you feel strongly about, the world becomes richer for your efforts. And you might just inspire others to act on their deeper drives in the process.

Arc of The Hellion:

The Lost Temple of Phoketh: