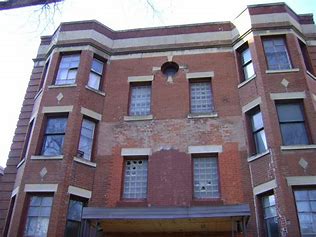 The Demon Hotel is a real thing. Or it was. Demon Hotel used to be an abandoned three story apartment block at 44 Hargrave in downtown Winnipeg. It was a formidable brick structure dating from around 1910, with a red brick facade and old fashioned bay windows which loomed ominously. The stone stairs that fronted it had been slowly worn by thousands of feet going back and forth over decades. The front lobby was covered with mosaic tiles, and featured a long broken pay phone.

Inside the building was a maze of resident staircases going up and down, emergency stairs, and service stairs which concealed the ancient wiring and plumbing. I’d actually visited it decades ago, passing by the broken pay phone, its casing cracked, and hanging out with street kids in the basement, as they hot knifed hash and talked music and gossip.

I’m not sure why the building closed down. Perhaps settling or subsidence of the soil following the great Winnipeg flood a decade or so ago, you could see visible cracks running up from the foundation, crawling the length of the building, and skewing the window frames, giving the front of the building a wicked twisted smile, as if it knew something you didn’t, something dark and disturbing.

But close down it did. The last tenants moved out, died or were evicted. Desultory efforts at renovation were begun and then abandoned. The windows on the lower floors were boarded up, but now and then, lights seemed to shine from the unboarded upper windows. Shapes were sometimes glimpsed in those upper windows, the fleeting impressions of windows looking down.

Strange things seemed to go on around that building, particularly in the narrow gutters between it and neighboring buildings. Those gutters were an obvious short cut to the back alley and next street over. Around this neighborhood, people were always taking short cuts, cutting between the streets. But no one ever seemed to take it, particularly not at night.

I admit, after it started to have a reputation, I went down one of those grass strewn gutters, the narrow alley between Demon Hotel and the next building. I was surprised by what I didn’t find. No abandoned needles, no used condoms, empty liquor bottles, no garbage, no signs of temporary shelter by homeless people. Just weeds, doing more poorly than they ought to, and dirt and the crumbling brick of Demon Hotel. It seemed like a perfect place for homeless or indigent people to retreat to, to shoot up, drink, or just carry on with something you didn’t want out on the street. There were other places in the neighborhood where you saw the traces of all of those activities, but not here.

It was broad daylight, and it just felt creepy. I felt like I was being watched, but there was no one around. I remember reaching up to place my hand against the crumbling brown brick, and suddenly, really not wanting to.

I wouldn’t go down there at night. I heard stories from people of things calling them into those alleys at night. No one went there.

People didn’t want to go near it. I remember sitting with my friend Dean one afternoon, on a bench just up the street, watching it, and watching people actually cross the street rather than pass directly in front of it, watching a homeless person come up the street, approaching it, and then barely a house length away, stopping and going back the way they came. Even the people that walked directly in front of it seemed to shy away, carefully looking away from it, their steps taking them to the far edge of the sidewalk from it.

The Demon Hotel was a name that appeared on graffiti behind the building one day. It just appeared. It would get painted over, but it always reappeared.

There were even urban explorers who went there. Those people who like to find their way into abandoned buildings, into closed malls, theatres and factories and just look around, chronicling the decay, the rawness of of both utilitarian construction, the remnants of the past and the work of entropy.

The first one went in, took pictures, around the basement and stairs, and then left almost immediately. He wouldn’t talk about it at all, which was unusual. The first one was braver, or more insensate to creepiness, he spent an hour wandering the building, he found it disturbing, in a way that was hard to put into words or show up on pictures. He declined to make a second trip, even with offers of a couple of cases of free beer.

Eventually, it became a source of fascination to Dean and a group of his friends who lived in the neighborhood.

Dean and his friends were a hardy bunch. They all worked downtown, late nights in a call center in the Inner City Electric Building. This another turn of the last century construct, in considerably better shape, with brass bannisters, creaking old elevators, and the remnants of a phneumatic tube system. That building had it’s own creepy history, complete with macabre stories, including that of a wino they’d found once, who’d crawled into the bathroom to die.

They even dedicated a web site to it, collecting the stories, some of them considerably embellished, putting up photos, trying to document the creepy goings on. It actually became mildly famous, far beyond the disquiet it inspired among neighbors. Demon Hotel was discussed and read about as far away as England and Australia, it was chronicled in books of ghost stories.

For me, the most disturbing story wasn’t the shapes in the window, or the strange calls in the night trying to lure people into the narrow alleys behind buildings, but a rather ordinary tale. Dean and a friend had been walking by, and they heard a faint phone ringing. They’d walked right up the steps following the sound, and listened to it ring on the other side of the boarded up front door. It was broad daylight, so for them it was just weird, not scary. But when they told me about it, I got shivers. I actually knew there was a pay phone in the foyer, I also knew it was smashed long ago.

They made a good effort, though it’s hard to put into words or photographs the sense of wrongness and disturbance that came with it. Ghost stories are one thing, maybe it was that cracked ‘smile’, the slight distortions of settling, but there was something genuinely unsettling about it. Even if you didn’t know the stories, there was just something off about it.

Oddly, when we dug into the history of the building, it seemed unremarkable. No great crimes or atrocities, just people living their lives. And yet, when you stood in front of it, you felt like it was looking back at you, and whatever it was looking back… there was something deeply wrong.

Eventually, it burned down, somewhat mysteriously.

In its lot another, more modern, and stunningly uglier apartment building has been erected, this one designated 50 Hargrave, the original address is retired forever. The story of Demon Hotel is gone. I assume that there will be nothing creepy or disturbing about the new building, apart from being a tasteless eyesore.

Well, not quite gone. My friend Dean persuaded me to collaborate on a screen play, based on a true story, about Demon Hotel.

It was fun writing a screen play. It’s a very different experience from regular prose, and maybe sometime I’ll write about those differences, that experience. It’s been interesting collaborating, I’m not usually one for collaborating. Technically, for me, this is work for hire, it’s Dean’s story and he owns it. But I’m proud to have worked on it with him, it’s a brilliant script, a fantastic ghost story, with overtones of Blair Witch, the Haunting of Hill House, and just a bit of Nightmare on Elm Street.

Well, all the characters names had changed, protecting the innocent and guilty alike. And the characters themselves had been changed, combined, divided, or flat out invented. The dialogue was made up, and most of the plot. Basically, what was left was a couple of tiny plot elements, something about a really expensive baseball card, that was barely alluded to.

I have the impression most ‘based on a true story’ movies are like this. They are… considerably evolved? Diverged? Creative with their source material? Things tend to go afield. Psycho, Texas Chainsaw Massacre and Silence of the Lambs are all based on the same original true story of Ed Gein. The Amityville Horror claimed to be based on a true story, but I suspect that there was a lack of actual demons in the real life.

Demon Hotel, the screen play? Well, as embellished as it is, it actually is based on true stories, genuinely grim and macabre true stories. Maybe some day, you’ll see it as a movie.

I have a feeling that the legend of Demon Hotel isn’t finished yet.

1 thought on “Demon Hotel, Based on a True Story”